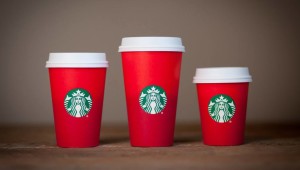 How much does a cup affect your relationship with God and Jesus?

Hi Peace Family! Have you heard about the uproar over the new red cups at Starbucks? Apparently, some Christians are offended that they took off the snowflakes and other Christmas-y images and that it’s another war on Christmas. This is Jami Mayberry, and I personally don’t see what all the fuss is about.  I think actress and Christian, Candace Cameron Bure said it best yesterday on her Facebook Page:

Starbucks War on Christmas?
It’s a red cup, folks.
Until Starbucks puts a baby Jesus or nativity scene on the cup while saying Merry Christmas, then pulls it because they say it’s offensive, let’s talk. I don’t remember Starbucks ever being a Christian company, do you?
A Santa, a snowflake, some holly, a polar bear, some jingle bells or plain red cup don’t define Christmas for me as a Christian. My relationship with Jesus does.
So, I will joyfully sip on my Starbucks coffee, in a plain red cup, and instead of complaining about the lack of decorations, I will lovingly share the good news of Jesus Christ with friends and co-workers or anyone who’s willing to engage in conversation.
Merry Christmas to all!”

I think she said it just right! It’s just a cup. One way we here at Peace 107 promote Christmas is with our “I Say Merry Christmas” bracelets.  We will start handing them out on November 27th and will have a list of all the participating businesses around the Bryan/College Station area you can pick one up. Be sure and listen for locations too, on Peace 107! We love you, Peace Family!